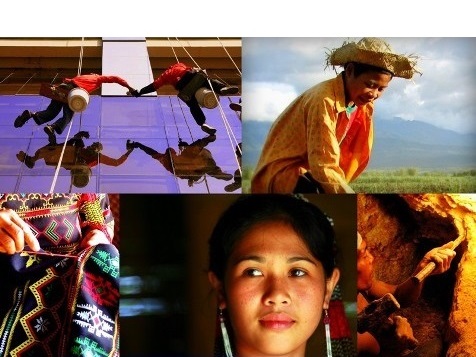 Philippines aims to empower and protect its poor, vulnerable and disadvantaged people, within the inclusive development goals and poverty reduction strategy of the country. The government, particularly the Department of Labor and Employment (DOLE) requested the ILO for technical assistance to conduct an assessment based national dialogue (ABND) exercise. The ABND is expected to provide inputs to the implementation of the Social Protection Operational Framework and Strategy (SPOFS) and the design of a 5-year National Social Protection Plan in the Philippines.

The ABND exercise will assess the social protection system in the country, identify gaps in design and coverage according to the vulnerabilities of the people, explore policy options to establish a Social Protection Floor (SPF) in the Philippines, and estimate the cost of these options. The ABND will also ensure endorsement of the SPF by policy makers.

The matrix lists the existing social protection, poverty alleviation, employment promotion and disaster management programmes in the country, It also identifies policy gaps and implementation issues, and recommendations for establishing an SPF for all people. The matrix is developed in joint consultation with the national and local governments, employers and workers, civil society and development partners, and endorsed at the cabinet level.

The cost of implementing the SPF recommendations is estimated until 2020. The ILO's Rapid Assessment Protocol (RAP) is a cost-estimation tool used for this step. The results of the RAP are used as a basis for discussions on prioritizing different recommendations and available fiscal space in the country.

The ABND report, including the recommendations for a nationally-defined 'SPF for all', is finalized, endorsed and launched by the government and other relevant stakeholders. Further, future steps of action are prepared, such as providing inputs to the SPOFS Action Plan and Philippines' first 5-year National Social Protection Plan.

To launch the ABND exercise in the Philippines, several meetings were held between government departments, social protection institutions, workers, employers and UN agencies.

Step 2 involves estimating the cost of an SPF in the Philippines using the "RAP costing model". This was done through data collection, computations and validation meetings. Download the RAP model and the list of scenarios

"The Philippines is committed to complete its Assessment Based National Dialogue, to determine its nationally defined social protection floor, on the four guarantees, to implement its Enhanced Social Protection Framework and Strategy."

Read more about ABND in Philippines from the SPF brief series

Find out more about social protection in the Philippines on the country page.